Behind the Scenes of The Second Trimester

The second trimester of pregnancy is an exciting time for moms-to-be. But, think of how exciting it is for your baby, too.

Even though he’s still completely dependent on you for survival and growth, every day in this trimester brings new discoveries and developments that put him closer to being prepared for life on the outside.

Your baby is growing, moving and developing so much that by the end of this trimester, if he were to arrive prematurely he could probably survive outside the womb—with medical assistance, says the American Pregnancy Association.

Here’s a look at what to expect from your baby during the second trimester:

3 Second Trimester Milestones For the Mom-To-Be

You find out your baby’s gender

Some parents would rather be surprised when they give birth, but for those of you who want to know if you’re having a boy or a girl, an ultrasound can usually tell you the answer around 20 weeks into your pregnancy.

Of course, this also depends on whether your baby wants you to know as well. If he or she is not in the right position, the ultrasound may only reveal backside images. Either way, you may also be able to get some pretty cool ultrasound photos of your baby to take home as well.

4 things you may learn about your baby at your 20 week ultrasound:

You start to feel your baby moving

While your baby is probably constantly moving around, you may actually start to feel it around week 20, says the American Academy of Family Physicians (AAFP).

These movements are a sign that her muscles are growing stronger, and that she’s learning how to use her arms and legs, hands and feet. She may even make facial expressions like frowns, smiles and squints.

You start to show

Some women start to look pregnant earlier, and some later, but for the most part, by this point you’ll most likely look—and feel—like a mom-to-be. That’s because your baby is growing and moving at a more noticeable rate at this stage of pregnancy.

6 Second Trimester Milestones For Your Baby

Around weeks 14 through 16, your baby may start making sucking and swallowing motions with his mouth, says the American Pregnancy Association.

During this time a substance called meconium will develop in his intestinal tract. This will eventually turn into his first bowel movement.

Also, around weeks 14 through 16, your baby will start to develop sweat glands. Her liver and pancreas will begin to secrete fluids as well, according to the American Pregnancy Association.

Her eyes will be fully developed around weeks 21 to 23.

Your baby’s unique little finger and footprints will develop during the second trimester. As the AAFP explains, fingerprints help your baby improve his ability to grip things in his hands. And as you know, your fingerprints are like your personal biological identification.

A fine, downy hair called lanugo and a waxy coating called vernix will cover your baby’s skin at around week 20, says the US Office on Women’s Health. That’s because her skin is thin, loose, nearly transparent, and needs protecting at this point. 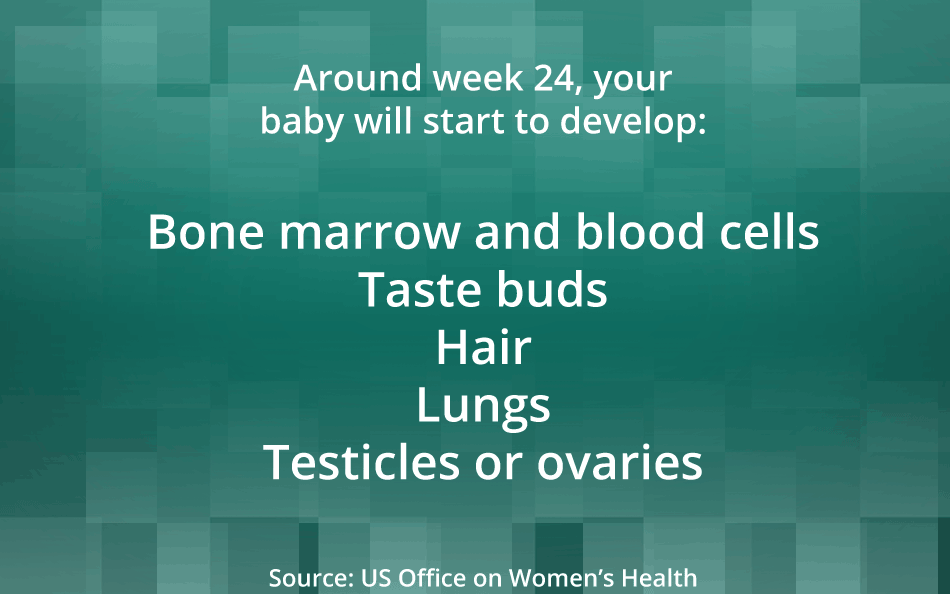 Source: US Office on Women’s Health

By the end of the second trimester, your baby will have developed sleep and wake cycles. Most likely, you’ll know when he’s awake, because that’s when you’ll feel him moving around.

He will also have what’s known as a startle reflex. He may seem to “jump” at times.

Third Trimester: A Closer Look at the Home Stretch of Pregnancy

Is There a Best Age to Get Pregnant?

7 Ways to Prepare for Your Next Adventure - Delivery Day

Gestational Diabetes: Your Risk and Prevention